Where do equality stakeholders fit in the new NHS Landscape

According to Minister, Andrew Lansley, the changes he proposes to bring about in the NHS will put patients at the centre of everything the NHS does.

That's a bold claim, which should be seen in the context that NHS organisations like the 152 Primary Care Trusts (PCTs) and the ten (regional) Strategic Health Authorities (SHAs) have specific statutory obligations to consult with the public, plus obligations (as public sector bodies) under the past and future Public Sector Equality Duties.

It's a bit hard to see how claims about the new system hold up when you look at the structure: 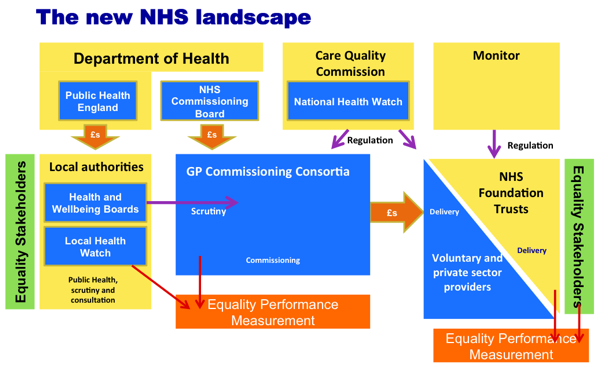 In this picture, the existing public sector entities which will still be around in the new landscape are in yellow, whereas the completely new bodies are in blue.

This isn't a complete picture, in part because some of the details are still only gradually coming to light.

Notice where Equality Stakeholders sit, however .. right out at the edges. And remember that the new GP Commissioning Consortia, although treated as public sector bodies, are consortia of private partnerships (the GP practices) who most certainly aren't.

Already, questions are being raised about whether the meetings of the pathfinder consortia are in the public domain. Some pathfinders are treating their meetings as closed affairs.

Consortia are expected to be quite lean organisations, which will most likely outsource a lot of what they need to do to people who are lining up for the business.

Companies like KPMG and Tribal are already well in the frame for undertaking the hard graft behind commissioning. Some existing NHS staff in the 'clusters' will also probably create subregional 'commissioning offers' -- turning themselves into social enterprises to do this. A body called 'NHS Shared Services' is marketing services to manage collective purchasing and handle functions such as HR.

None of these players, undertaking crucial functions in the new landscape, will be directly accountable in any way to local stakeholders.

The great white hope offered for the public to have a voice is the Health and Wellbeing boards and local 'Health Watch' organisations which will sit within local authorities.

Plans for Health and Wellbeing boards are sketchy at present -- mainly because the Government is leaving the details for local players to thrash out for themselves. Mainly these are likely to be dominated by the institutional stakeholders though.

Questions also need to be asked about the capability and capacity of local 'Health Watch' bodies, as these will be based on the existing Local Involvement Networks (LINks). The problem here is that the position with LINks is patchy. In particular, it's hard to establish just how inclusive the existing organisations are. And do they really have the wherewithal to challenge the big hitters in the system?

I don't doubt that some of these questions will resolve in the fullness of time. However, given the number of times that the Secretary of State churns out the mantra that 'patients will be at the centre of everything the NHS does' you'd think it would be a bit easier to see how.

A DNA Testing Solutions can spotlight those key genetic markers to manual humans across the right course. Frequently, customers will find the outcomes in form around preceding weight-loss recurring attempts which have been extra a hit and act as a kind of reassurance. The one's tests also can think about the body’s potential to metabolize certain substances like fat, proteins, and caffeine.

The great white hope offered for the public to have a voice is the Health and Wellbeing boards and local 'Health Watch' organisations which will sit within local authorities. living dna discount