This is the eighth and last piece in an ongoing series of posts explaining the approach which our team at NHS North West has taken to drive up equality outcomes in one NHS region... and the spinoffs of national best practice which that work has generated.

Next time, having talked about what we've done, I'm going to move on to talk about what we are doing to preserve the advances we've made, as the NHS is restructured, and as our team prepares to enter the last 12 months before NHS North West is disbanded.

Before that, however, I've one last topic to cover regarding the programme's delivery.

The story so far (and to come) 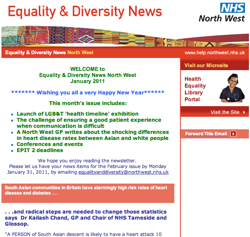 In the last blog I provided quite a detailed summary of all the aspects that I've written about so far.

As I've explained, we call it an "eco-system" approach. That's because our overarching strategy has been about creating an environment conducive to change and improvement. All the components are essential for change to happen and be sustainable.

Over this series, I've described all the elements of the ecology:

I think people sometimes perhaps make the mistake of assuming there is a single 'silver bullet' for this kind of transformation work -- a short cut to success -- and that all you have to do is put all your efforts into the one thing, such as a particular tool.

Personally, that's one of my concerns as the rest of the country prepares to take up the  Equality Delivery System (EDS), which we now know will be mandatory for all NHS organisations when it is launched in May. My fear is that people will focus only upon implementing the EDS (a performance measurement framework) to the exclusion of thinking about how they are going to generate the performance they're going to measure.

Unless people are careful, the EDS could end up measuring their failure, as opposed to their achievements.

This is something we are looking at very closely in our plans for how to embed equality, diversity and human rights competence and philosophy into the new health economy structures over the months ahead.

However, I'm getting ahead of myself. Let's talk first about communications.

So many organisations, so many people, so much to communicate 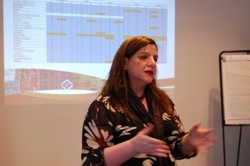 It's so obvious that it hardly needs to be said. You can't expect to promote and manage change without communicating with people.

My colleague Shahnaz Ali, the Associate Director for Equality, Diversity and Human Rights (for whom I work), saw this clearly at an early stage in formulating her strategy. As a result, she recruited an expert communications lead to our team, to refine and them implement a specific comms strategy for our programme. These days Loren certainly has her work cut out!

It's helpful to think about who we need to communicate with: 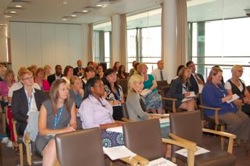 Also, what we need to communicate about (and how often):

From this kind of review, we established that the programme needed some core communications tools.

Our monthly E&D newsletter supplements day to day operational email communications with groups of people by providing a colourful, engagingly written vehicle for E&D news, timely reminders, event details and so forth.

The circulation has grown with every month. The core target audience is the E&D professionals and managers in our 63 commissioning and provider trusts. However, that is now supplemented with an increasing number of subscribers from other regions, the Department of Health, stakeholders, and basically everyone who is interested in a regular update on what we are doing.

In addition to the regular monthly news, we also publish special editions on particular topics. This week we're sending out a 'special' about the new Public Sector Equality Duty. This is also one of our vehicles for launching new developments.

You can see a sample of the newsletter here.

The HELP News feed and blog

I've already described our Health Equality Library Portal (HELP). The blog explaining the background is here. Basically, HELP is a one-stop library and portal for finding authoritative evidence and background information about every equality target group, and the web sites of organisations with further pertinent background. It contains catalogued information about more than 1,400 documents and 300 external web sites.

However, HELP was designed to be more than just a repository. It also contains our own ad-hoc news feed, in which we editorialise relevant topics; a regularly updated events calendar; an aggregated feed of news from other organisations; and a Blog about the programme, with contributions from Shahnaz, myself and our communications lead. (The eagle eyed will notice that some of my HELP Blog items have appeared here as well and vice-versa).

Periodically we have something which we feel deserves a wider audience. That's why you'll sometimes see articles like this, featuring Shahnaz Ali, in the mainstream press: The Guardian: A Partnership of Equals ... or this: We know diversity work saves cash, but does George Osborne?

We also sponsor and contribute to key events in the calendar for various communities. For instance, we regularly sponsor and appear at the Pride Parade in Manchester. The 2010 parade included a huge turn out of NHS staff all walking together. We also sponsor various Disability and awards events around the region too.

Our first exhibition resource was produced in 2008 to mark the 60th Anniversary of the NHS. It was a carefully researched and professionally designed series of static display panels charting the contribution which Black and Minority Ethnic people have made to the National Health Service in that time.

The "BME Timeline" has been extensively booked out since we launched it at a big gala event in the 60th Anniversary week. NHS organisations and other interested organisations book it from a company that organises the transport and setup. Since it was launched it has seldom been out of use.

The timeline was also accompanied by a professional 20 minute film covering the 60 year history, and interspersed with interviews from half a dozen NHS staff describing their own careers in that time. To make the resources even more widely accessible, the film and all the timeline details have also been made into a permanent online exhibition.

The success of the BME Timeline has since led us to commission a similar exhibition about the history of LGBT people in medicine and the NHS. This, again, consists of 20 large display panels which can be set up in any suitable indoor public space.

The LGBT Timeline exhibition was launched at the offices of the Lesbian and Gay Foundation in Manchester on February 1st 2011, to coincide with the start of LGBT History Month (of which I'm a patron). A film, a 20 page booklet and an online web display are also in preparation as I write, and I'll obviously blog about those when they are launched.

Pulling it all together

I've not described everything we produce, as it's a long list. However, I've hopefully picked out enough to underscore the point that it's not enough to have a strategy. You also have to have various ways of communicating about it and being seen by all the stakeholders.

Anyway, as promised, next time I'll be turning my attention to the challenges of ensuring that all this doesn't turn to dust as the NHS completely reinvents itself over the next couple of years...