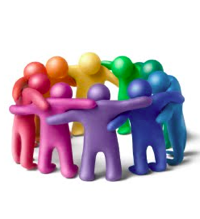 This is the seventh in an ongoing series of posts explaining the approach which our team at NHS North West has taken to drive up equality outcomes in one NHS region... and the spinoffs of national best practice which that work has generated.

The story so far

I've previously described the idea of an all-round evidence-based strategy for driving up equality outcomes as an 'Eco-system' approach. That's because many aspects of the environment need to be right for a successful equalities approach to be seeded, take root, grow and flourish.

So far, in the first part of this series I've talked about the importance of understanding the crucial difference between measuring the work you put in and the tangible outcomes which you can show for it.

After establishing what it is we need to measure, part two described the approach we devised for measuring outcomes consistently and objectively - our Equality Performance Improvement Toolkit (EPIT). Our success with EPIT means that the design principles lie at the heart of the forthcoming Equality Delivery System (EDS), which will be launched by the Department of Health in the Spring.

In part three I took a step back to discuss why all this stuff is important to embed in the culture of a system like the NHS.

Then, in part four, I introduced the research and findings which pointed to the things we concluded we must do to facilitate the necessary change.

In all of this, so far, I've barely mentioned the role of leadership -- and whether the managers tasked to lead change like this in the NHS have the competencies and backing to succeed.

If you go back to our Landscape of the Region research and conclusions then you'll find that quite a lot of the conclusions are about people, their skills, experience and the support that's provided for them to succeed in leading an E&D change agenda.

I should stress, of course, that although the research was conducted across NHS organisations in North West England, the issues are the same everywhere. Indeed, more recent research carried out to test the design of our Competency Framework across several Strategic Health Authority regions underlined that, if anything, the constant development we've given in the North West has resulted in a better picture than in other parts of the country.

These are not the only weaknesses or inconsistencies, however I'll leave you to read the rest in A Landscape of the Region.

Why is leadership so important in this area?

The purpose of measuring equality outcomes is to identify areas where the organisation is weak and to put those right. In doing that effectively, you also contribute towards higher level quality and effectiveness goals.

It's not just about complying with the law. And it's not just about being ethical or touchy-feely with people. The kind of outcomes we are talking about improve clinical results, allow us to do more with the same level of resources, and to save the human waste of losing staff unnecessarily, or dealing with complaints.

The challenges for each organisation will be specific to them. Therefore we can't just say to everyone, "do this and the problem's solved". Leads have to work it out for themselves.

Some organisations make the mistake of thinking that just because their managers have all been on a 'diversity awareness' course they've done all that needs to be done. However, those also turn out to be among the weakest in terms of tangible results.

An E&D Competency Framework for the NHS

All of these factors pointed towards the need for a national level NHS E&D Competency Framework, which is now in the final stages of development.

We are hoping that the framework, jointly funded by the Department of Health and NHS North West, and developed by experts in the field, will be launched at the same time as the Equality Delivery System (EDS), as one of the essential tools that organisations will need to improve their measured performance.

The framework is based on a combination of in-depth research followed by testing with professionals who already lead the Equality and Diversity brief at a senior level in their organisations. Extensive field research identified five core competency areas that successful leads must possess in equal measure:

There is obviously a great deal in the detail behind each of these five core areas; each comprises many individual standard competencies. However our extensive field testing confirmed that the top level headings and the assessed levels of individual competencies and leadership qualities which they comprise reflected, very well, the profiles of E&D leads who are demonstrably successful in their work.

Notice how the first two competencies are the only ones that require specific equalities knowledge. The other three are far more generic competencies that should be possessed to varying degrees by any senior manager.

The top level headings are defined in terms of generic competencies, making the first part of the toolkit independent of the NHS context. It can be used anywhere. Those generic competencies are then mapped back onto the NHS's Knowledge and Skills Framework (KSF) and Leadership Qualities Framework (LQF) and assessed in terms of the levels of these abilities and experience that are required.

In turn this mapping also allows managers to compare the E&D leadership role with other evaluated NHS functions. It means that staff and managers can both understand what development a manager would need to move into E&D leadership, or what they would need to go onwards to other responsibilities as part of a managed career. This has never been done before. It means, potentially, the end of seeing Equality and Diversity roles as a career cul-de-sac or graveyard.

The work has also been important in establishing a firm case for how senior and experienced an E&D lead needs to be. Again, there was no standardisation to this before, as I've mentioned already. The analysis points very firmly to the need for E&D leadership to be seen as one of the Agenda for Change Grade 8 roles, with the possibility for entry at grade 7 (subject to having the right development plan, mentoring and line management in place).

The competency framework doesn't stop at defining in detail what competencies a manager in this role should have. The toolkit also includes fully worked job descriptions and person specifications for recruiting, plus tools for extensively evaluating where existing staff stand against each of the competency areas.

The training needs analysis toolkit was extensively tested with volunteers from three Strategic Health Authorities, covering a wide range of organisations (PCTs, acute, mental health and other specialist provider trusts). Volunteers were also selected from a range of existing pay bands as well.

The pilot results were interesting in that, although they revealed a typical spread of capabilities (and a correlation between success and competence), each individual had particular weaknesses. Some tended to be stronger in competencies 1 and 2; others in 3,4 and 5. The results underlined the importance of us providing suitable developmental approaches that could target the weaknesses and produce stronger, more effective, managers. Again, we don't think that anyone has done this in such a systematic way before within the sector.

A tool for organisations

The competency framework will do several things for organisations:

Not surprisingly, we are excited about the ability of the new Competency Framework to address all the structural weaknesses in E&D Leadership that I described above. For the NHS to improve its' equality outcomes requires some fundamental change leadership in every organisation -- so getting the right people properly equipped to lead on this is a crucial part of achieving success.