Last week I wrote about the scale of the challenge involved if we are to succeed in making Equality and Diversity philosophy and competence part of the DNA of the new institutions which will define the landscape of Andrew Lansley's NHS.

I talked about the organisations, such as SHAs and PCTs, which are to be disbanded, and about the new bodies which will take their place: hundreds of GP consortia in charge of commissioning, and hundreds of Health and Wellbeing Boards set up by Local Authorities. I also mentioned the role of the new PCT Clusters during the transitional period.

This week I want to move on to discuss how to meet the challenge of shaping all of those. 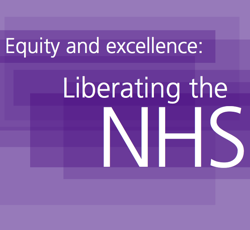 As I explained before, the North West region where I'm based already has 19 'pathfinder' consortia who've been given the Ministerial nod to proceed. The Department of Health have published a map of the picture across the whole country.

Primary Care Trusts cannot just stop what they are doing. They have statutory responsibilities which will continue until the forthcoming Health Act takes them away. The pathfinders are therefore proposed bodies which are being allowed to set themselves up, in shaddow form at first, to iron out how they will work once given statutory powers and responsibilities by the new legislation.

Local authorities have long had statutory powers to scrutinise the management of healthcare on their own patch. Scrutiny panels have operated as subcommittees of the elected membership. Some have been very active and engaged; others less so. However, the notable point is that this has been political scrutiny of NHS bodies (the Primary Care Trusts) which are themselves publicly accountable.

Generally, because of the capacity of such subcommittees, the scrutiny has tended to be patchy - either looking at the overall picture in too little depth, or scrutinising only a few specific functions in detail.

Health and Wellbeing Boards (HWBs), as described by the White Paper, are somewhat different beasts. For starters they are possibly the first kinds of body in this area to combine both elected councillors and executive staff.

The brief is wider too, since the goal is to plan and influence a joined up local approach to both health and social care. As local authorities are being given back local responsibility for public health the HWBs operate at the interface between public health, social and health care.

If any of this sounds vague it's because nobody has much idea of the details beyond what has appeared in the White Papers that have been published.

This reorganisation is unlike any other because there is no master plan of what we are all working towards.

Instead, local stakeholders are expected to come up with their own models for how to organise all of this.

The founders of GP pathfinder consortia have to decide on the structure of their organisations, for instance. The general expectation is that these will be very lean organisations -- a small executive team, few directly employed staff, and with many functions either shared with similar bodies or outsourced to suitable independent providers.

Many of those services don't yet exist, however -- or they'll need to ramp up their scale significantly. There are organisations that specialise in purchasing, IT and human resources, for instance. Management consultancy organisations like KPMG and Tribal are also widely tipped to be lining up to bid for slices of the pie ... though they will almost certainly have to recruit from within the outgoing SHAs and PCTs to increase their capacity to do so.

The head of the new NHS Commissioning Board, David Nicholson, expects that the new clustering of PCT resources will also give rise to 'Commissioning Offers' -- groups of former PCT commissioning specialists who will be urged to separate from the mothership as social enterprises, offering to fulfil the bulk of the detailed work in specifying and contract managing services at the behest of GP consortia. They may have to compete against the private sector competition though, and it's a wonder how local knowledge, expertise and relationships can be preserved through all of this.

The picture is similarly confused about Health and Wellbeing Boards too, especially as local authorities are being expected to create these at a time of massive retrenchment, owing to the financial pressures placed upon them through savage cuts in funding from central government. It's hard to picture, for instance, how long the £20Bn promised for public health funding can remain securely ring-fenced.

All we know with any certainty about HWBs is that they are likely to be huge committees, with so many interests wanting to be involved. I'm not clear about what sort of executive resources will sit behind the public face of these vast committee meetings, or how effectively such a complex forum of interests can operate and make decisions. Nobody can say till we see the details which each set of local interests puts together.

Given so little detail of what local structures will be like, it's not possible for anyone in the existing structure to give definitive guidance on how assure the place of Equality, Diversity and Human Rights going forwards. Also, since we at SHA level only have 13 months left to operate, we won't be around at crucial times in the future to provide guidance.

Instead, what we have to try and do is to equip the partners who'll most likely remain at the centre of these changes to produce some best practice, and to ensure that is shared with others.

The North West has a strategic leadership group for Equality and Diversity, made up of leaders from across the existing landscape. It includes chief executives, workforce and commissioning specialists, clinicians, etc... When it met to discuss the challenges ahead, the conclusion was that we needed to encourage and nurture a model example of how to operate in the new landscape.

In practice, the E&D leadership group found not one but three enthusiastic organisations willing to become such 'Early Adopters'. They represent some of the best performers, measured by achievements in the Equality Performance Improvement Toolkit (EPIT). Therefore, if anyone should have a commitment and expertise to successfully embed and preserve E&D methods and outcomes it would be them.

The Early Adopter systems are:

Having a small number of these early adopter groups means that we can focus our resources on helping them to find effective ways to work in the future. Our role is then to help share what they produce with their peers ... the other 16 pathfinder systems and, ultimately, the remainder of an estimated 40 or so consortia in the region.

The principal objective which we've set for the early adopters is:

To assure the embedding of E&D philosophy and competency among personnel in the new landscape at both cluster and GP Commissioning Consortium level, in conjunction with the formation of Local Authority Health & Wellbeing Boards and preparing stakeholders such as Local Health Watch.

In other words, the objective is for each group to consider how to embed a culturally competent E&D evidence-driven planning and governance approach within the whole scope of a model local system.

As we want people to own the responsibility for their success, we're not setting out to be overly prescriptive about the approach they take to achieve this outcome. However, we have suggested a few aims to get them started.

Aim 1 - To identify the appropriate levers for successful outcomes in each of the relevant domains, including (but not restricted to):

As you will see, some of these aims are about the necessity for statutory compliance, whereas others are about improving evidence based decision making and quality in various ways, tied to programmes that continue.

Aim 2 - To develop models (and sharable templates) for operational designs (including any necessary capacity and capability development) to embed the above mentioned levers in each of the following organisations or structures:

So, if the first aim is about establishing clarity over what drives success, the second is about where to ensure it is covered.

We also then suggest to the early adopters that they think about the means they are going to employ. Again we don't set out to be prescriptive; however we have offered them some suggestions to get them started:

How will it work?

This, for me, is the big unknown.

Everything we've done previously has provided very specific leadership to the health economy in our region. In this case, the success is really in everyone else's hands. All we can do is try and facilitate the early adopter groups to cover all these kinds of areas successfully, and to share that with the rest of the region as it comes out of their discussions.

What worries me is that any private-sector companies that take over elements of NHS provision will not have to worry about PSED and as such are unlikely to have E&D embedded into their operations in anything like the same way that the NHS does now. This would appear to mean that there is going to be a wholesale removal of E&D from NHS provision, which, it would seem from the POV of a lay-person, that minorities such as trans people are likely to suffer from far greater exclusion as more and more NHS functions are privatised. I am assuming that these new intermediate organisations will have to embed the PSED, but it would seem to be very difficult for them to police multiple private companies and their E&D policies, or lack of them.

I am particularly concerned about this from the POV of schools where privatisation will effectively remove any pressure on schools to embed the PSED. Given that the education system is probably more transphobic, as well as homophobic than the NHS, this could be a huge setback for trans people, especially since there will be no intermediate organisations like the ones you describe for the NHS; just the DfE and schools...

You're quite right Natacha. Private sector providers who enter the market and are commissioned to deliver services with NHS money won't directly have to comply with the Public Sector Equality Duty (PSED) ... though they will, of course, be subject to the discrimination provisions of the Equality Act itself.

I could also add that GP Consortia won't be subject to public scrutiny in the same way as the PCTs they replace. Some of what they do will also probably not be subject to Freedom of Information requests either, where it can be argued that the subject matter (e.g. contracts with providers) is commercially sensitive

In theory, commissioners should be writing E&D provisions into their contracts .. though I can tell you that very few have thought about this beyond vague expressions about compliance with legislation.

We have succeeded in getting PCTs in the North West to be much more specific, and some of them have been very effective in managing the EPIT performance of their providers. That's one of the bits of good practice which we want to see preserved. However, if you look beyond the North West then the picture in that respect is not very promising.

All this is why we therefore have to work hard at what we CAN manage to embed into the commissioning and HWB sides of the landscape, and to build an understanding that this is something in their interests to support.

See my earlier piece 'Why Bother?' for an explanation of why 'compliance' is not the best message.