One year on. The message we missed. 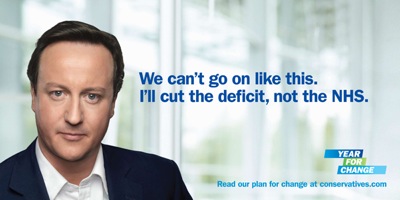 It's little more than a year since David Cameron promised "I'll cut the deficit, not the NHS"

The occasion was the launch of the Conservatives' draft manifesto, on 4th January 2010.

The creepily airbrushed photo at the centre of the party's new poster campaign was probably what caught our attention the most.

But perhaps we should have been paying more attention to what was said that day too, as the clues were there.

... We’re going to change the way the NHS works because it could be so much better. [..]  If we win this year's election, Andrew Lansley and his team are going to give the NHS back to who it belongs - the people. To the doctors, nurses and professionals who work in it. [..] We’ll say to doctors and nurses: "those national top-down targets you hate because they distort clinical priorities, they’re gone. Instead of answering to the people in Whitehall, you’ll be answering to the people on the ward, for the quality of service you provide and the results you achieve."

Perhaps we should have asked more closely at the time what he meant.

Of course, the flowery rhetoric from a year ago bears little resemblance to the changes now being wrought. Andrew Lansley's changes won't make the NHS directly accountable to the users in anything like the way described. However, that's not my point.

My point is that, in a sense we were told that major change would come if the Conservatives had the chance of power. It's just that the message was dressed up in such easily dismissible froth that we missed the bit we needed to have seen and challenged.

Of course there was plenty that David Cameron promised in that launch which he's failed to deliver -- the promises on Maternity services for one. The whole thing bears re-reading in the cold light of day.

But it's the full import of the bit we were distracted away from that will have the longest and most dreadful consequences.

The Tories and their Lib-Dem servants are determined to privatise the NHS, just as they privatised many local government services through Compulsory Competitive Tendering under Thatcher's regime. Why is anyone surprised? Not me because I worked in local government when CCT was enforced.

Privatisation is always Tory policy. But maybe it can be stopped this time. They've U-turned on privatising our forests. I hope social media savvy people who treasure our NHS mount a similar campaign to savd this equally precious resource.

I don't think the electorate can be at all blamed for not questioning him more. Even with the retrospectiscope on it does not excuse them; it was their responsibility to tell people what they were planning in an understandable way and check it was understood.

Check out the GMC website on obtaining consent from patients. If it were doctors, or any other health professional, instituting these changes with this poor giving of information and lack of consent they'd be struck off.

These are some huge changes to people's healthcare; the responsibility to obtain informed consent was theirs. The patient can't be blamed for being uninformed.

Not all of us were fooled, the problem is that people wanted to believe the Tories had changed, and when we warned about the subtle language people kept on going on about how we could trust Cameron because of his kid.

People simply wanted to believe in the detoxified brand.

ITS all about POLICING with Criminal mayor Ray Mallon on the Conservatives justice reform site,stateing child abuse is Right for the government,I say its all about control orders against Criminals,take away there rights is the first step to control,take away there rights to votes,is Control,take away there Rights to HUMAN RIGHTS,echr exchanged directives,TaKE away there Rights to Claim Compensation,First take away disabled rights to Claim BENEFITS,neil scott convicted wrongly for a burglary he did not commit,has every auctioning stopped on behalf of Ray Mallon the defective detective,IS David Camerons Giving a Free Hand to Criminal Mayors a bit too close to Neil Scotts Buglary case ETC that has implemented all those involved in his court Case as fraudulent Exposed By Neil sought after Undermining his case of Falsified evidence of Cleveland police officers,from the 16 witnesses,CPS,forensics,IPCC,5 ToP judges,in a conspiracy to defraud in public office,as the facts remain,Neil Scott has a link now to Ray Mallon,ian Duncan Smith Mp,the death of MP kumar,Jp Morgan,Tony blair and its all available in the facts of his case

The objective of your Roseman University College of Nursing is to provide high quality and revolutionary education to fulfill the diversified well-being requirements of our society. You can expect to accomplish this objective through your theoretical and scientific experiences, as a university student. , and staff works along in lots of ways that will help you achieve your desired goals. Administrators and faculty