The scale of the challenge

Over the last couple of weeks I've been blogging in detail about the strategic approach and achievements of the Equality and Diversity programme at NHS North West. I covered the theory, the underlying research, the tools and approaches we developed, and the 'EPIT' performance measurement tool which has allowed us to objectively measure the outcomes which our system of 63 NHS organisations were achieving. I also introduced our work to formalise leadership competence in this field and the importance of a communications strategy.

Yesterday, I discussed the reasons why equality and diversity work is so important within the NHS -- not simply for legal compliance.

Now, as promised, I am going to move on to talk about the approach we are taking to embed some of this into the completely new commissioning and oversight structure that is already starting to take shape.

Who stays, who goes, who comes? 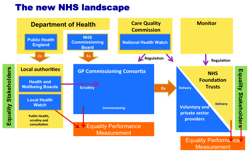 The change that lies ahead for the NHS is the biggest that it has ever undergone since it was established in 1948.

Unlike any previous change we also don't have a complete roadmap as we embark on it.

The White Paper: Equity and excellence: Liberating the NHS, published on 12th July 2010, provided an outline of the biggest changes. However, it also raised as many questions as it answered.

Extra details emerge from time to time. Some of the original proposals have already changed. And, overall, the Minister (Andrew Lansley) has signalled that he wants the emergent organisations, such as GP Commissioning Consortia and local Health and Wellbeing boards, to work out crucial details for themselves.

The big picture for the purposes of this discussion is about the commissioning side of the NHS. I'm not ignoring that there are big changes too for the providers. However - for the moment at least - provider trusts (which run general and specialist hospitals, mental health services and ambulances) will still be there.

The same can't be said for the organisations who manage the present system:

There is a lot that can be said about all these changes; however I don't want to get distracted. The important thing from the perspective of this discussion is that Equality and Diversity within commissioning currently sits in PCTs - which are going - and it is overseen and performance managed by SHAs - which are also going.

If an understanding and responsibility for Equality, Diversity and Human Rights is to continue on the commissioning side of the NHS system, we therefore have to build it all over again in the new structures as they emerge. I.e. We need to embed E&D into:

The local challenge puts this into even clearer perspective.

The NHS North West Equality, Diversity and Human Rights team consists of just five staff -- three managers, a PA and an information and policy officer who maintains our HELP database.

There is the Associate Director of Equality, Diversity and Human Rights, Shahnaz Ali; there is an Assistant Director who manages all our communications and outreach activity, including the newsletters and our consultation work; and there is myself as the team's programme manager.

The communications manager and myself both work only 3 days a week. We are a tiny team, currently managing to oversee stable operations in 24 PCTs and 39 provider organisations.

The challenge ahead of us, before the lights go out next year, is to influence the formation of all the new GP Commissioning Consortia in our region, plus the PCT Cluster which will carry the responsibility for E&D for the 5-6 Clusters that replace us.

So far, in the North West, a total of 19 "Pathfinder Consortia" have been announced, covering about half of the population. We expect that, overall, there will eventually be about 40-50 to replace the 24 PCTs.

No prospect for top down control

A glance at these overwhelming numbers makes clear that there is no prospect for our tiny team of 3 managers to influence how Equality, Diversity and Human Rights gets embedded into 40-50 new organisations, all of which are on a mission to be lean and mean, and are at risk of assuming that E&D is a compliance issue they can tackle later.

Besides, some of these organisations won't be in any position to be approached about this aspect of their responsibilities until later this year. We have just months to achieve any effect we can have.

We also need to ensure somehow that the building and influencing work goes on after we've ceased to have any statutory power and have been disbanded.

David Nicholson, who chairs the Department of Health's Equality and Diversity Council (EDC) and is the Chief Executive of the new NHS Commissioning Board, has committed to providing one important lever - by saying that participation in the new Equality Delivery System will be a mandatory registration requirement for all GP Consortia in the new system.

There are no equivalent levers for ensuring how E&D is integrated into Health and Wellbeing boards though. And it's one thing to commit to being measured on E&D outcomes at some future date, but that doesn't guarantee the new organisations have any kind of strategy for how to achieve those outcomes.

In the next post I will explain the approach which the North West is taking.

It's an approach which is designed to help distribute the challenge and to preserve as much best practice as possible into the new structures. We've dubbed it, "Building the future, maintaining the best"

Like many of the things we do, it's an innovative way of addressing the big challenges we all face. We don't know whether others will follow suit. They are almost certainly facing the same challenges though.