Coming Soon .. A new 'how to' guide for monitoring sexual orientation 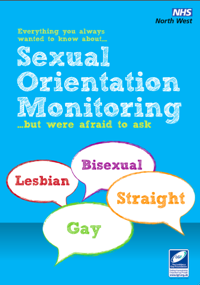 Everything you always wanted to know about Sexual Orientation Monitoring ... but were afraid to ask

One of the nicest things about working where I do, as the programme manager for Equality and Diversity in one of England's Strategic Health Authorities, is the ability to have a hand in commissioning and influencing some really useful tools, resources and good practice to advance LGB and T equality outcomes.

I've written a lot this year about our programme of work and why it matters.

Earlier this year my colleagues and I at NHS North West launched a brand new timeline exhibition to educate NHS staff about lesbian, gay, bisexual and trans people's history, their challenges and their contributions to medicine and healthcare. The exhibition went on the road in February and has been receiving great feedback. Very soon we'll also be launching the online interactive version, which features a more detailed booklet and this film as well.

We've also invested in initiatives to promote sexual health for lesbian women, and to foster the creation of a more LGB friendly environment in GP Surgeries, piloted in the Greater Manchester area.

We spend on these projects to lead by example and establish best practice where it doesn't already exist. In that way we help create the case for local NHS organisations to then follow-on by funding such things more routinely themselves. (Admittedly the latter is difficult in the current climate).

Of course, we also invest around other diversity areas too.

For instance, we are currently promoting research into how breast cancer and screening particularly affects South Asian women. We also sponsor events such as the annual Disability Living Awards and Disability Awareness Day, and we engage closely with partners from all the equality strands to consult and obtain advice on a wide range of issues through our Health Equality Stakeholder Engagement (HESE) approach. We also work in less visible ways behind the scenes in areas such as gender identity.

And all this is on top of our cross-cutting activities, such as developing a national competency framework for NHS E&D leads and operating the ground-breaking Equality Performance Improvement Toolkit (EPIT) which we pioneered.

So, our recent work on sexual orientation and gender identity projects is only a small part of what we do as a whole. However, as work around race or ethnicity, gender and disability has been underway for more time, and people are less familiar with areas such as sexual orientation, there's a genuine case to invest in playing catch up in specific ways.

The need for monitoring

Monitoring is the term to describe any kinds of data collection which contribute to understanding the detailed demographics of service users and the workforce. When done well, this data helps employers, commissioners and providers to improve what they do -- whether that's improving the diversity of the workforce to more accurately reflect the population, or configuring services so that they work better for the people who use them.

Most people are familiar with being asked for this kind of information -- when applying for a job, for instance, or when registering with a new GP.

Some organisations have also experimented with collecting this kind of information on sexual orientation.

Until the new Public Sector Equality Duty came into effect there was no formal impetus to do this and most organisations shied away from the prospect. Now that the new public sector equality duty is in effect, however, they now need to think more seriously about doing it.

As in any other area, if the organisation doesn't collect such information it cannot possibly claim to know whether it is meeting peoples' needs and not unintentionally discriminating.

The prospect of monitoring for sexual orientation is met with fear by some organisations -- mainly fear of the unknown.

To rationalise those fears managers often come up with lots of suggested barriers. One of the most popular is the notion that patients or staff will be offended by being presented with questions about their sexual orientation.

This is odd, given that medical professionals are trained to routinely ask far more intimate questions about every conceivable bodily function and to poke around our orifices and excretions. Asking someone's orientation is not as though you are asking them when and how they last had sex. You're just asking about the kind of life they lead and who they are likely to share it with. For Doctors and nursing staff that should be a fundamental of building a picture about their patient.

Other suggested barriers include complaints that computer systems aren't built to collect this data, or that staff would be embarrassed or feel it inappropriate to ask some categories of patient.

In keeping with our philosophy of using our resources and influence to break new ground and establish best practice for others to copy we realised that there was a serious need for a matter of fact guide answering all the usual questions and fears about sexual orientation monitoring. Better still we wanted to provide some practical examples where people are already getting things right.

We commissioned a team from the Lesbian and Gay Foundation to do all the detailed research and writing for us. In turn, they recruited a steering group of experts from across the public sector (not just health) to ensure the final guide would cover every aspect of the topic and provide the best advice and case histories.

The guide is now in the advanced stages of layout and production. We all had our photos taken for it today, for instance. We plan to launch it at LGF's resource centre in Manchester's gay village on Monday 12th June. (If you'd like to be there contact LGF for places).

It's just another resource to add to the arsenal of tools which NHS staff need in order to ensure they meet the needs of all of the population they serve, rather than only a part.

Many more tools like this are still needed, of course. As I said at the outset, filling those gaps is a great part of what we do. It's just a shame that we soon won't be around any more in the present form to do much more.