A conflict of loyalties 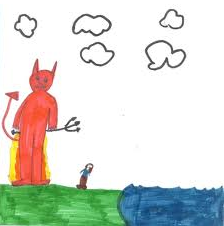 Have you ever felt compromised between something that would benefit your community but is bad for everyone else?

Have you struggled with loyalties towards someone who has helped your cause but is now on the 'other side'?

These are moral questions which advocates for equality can find themselves having to ask.

I'm not sure I know the answers. Are you?

Black, white and all the shades between

Politics always used to seem so much easier than this.

In the good old days (before May 2010), we who aim for greater equality and fairness knew where we stood.

Whichever party was in power, Labour or Conservative, our friends might seem to have been mostly on the right side of the fence with us.

Policies were normally, quite obligingly, black or white. Even if the subject was outside of our speciality, we had sufficient confidence in what we thought we knew of the party putting a policy forward to care or not care without too much introspection.

More to the point, in the tribal politics that we have all been reared on in the UK, friends were supposed to be all on one side, and the baddies were on the other.

Sleeping with the enemy

Of course, everyone knows that I have a compromising personal history where tribalism is concerned. I've never made any secret that I was brought up by shopkeeper parents as a Tory. It's only in the last year that I've become a paying (if inactive) member of the Labour Party.

I grew up without really challenging the messages around me. The way that the left branch of UK politics behaved and was portrayed in the 1970's, when I was a young adult, didn't encourage me to ever think of changing my stripes.

In 1992 I formally joined my local Conservative Party in the Cheshire village where I lived. Admittedly, the motive was partly to piss off my vocally socialist boyfriend at the time. Still, being the only young woman's face in the branch for years, I was instantly taken to their bosom.

Within a week of timidly volunteering to go canvassing in my village the branch secretary died from a heart attack. To my disbelief they asked me to step into his shoes. Cautiously, I agreed.

The warm embrace of the local establishment went on.

Soon, the formidable ladies of the Cheshire lunching set asked me to chair the constituency's "Younger Women's Supper Group" (ages 40-60). I went on to become both the treasurer and vice chair of the branch, and one of the organisers of a new candidate's election team. I even set up the constituency's first computer.

My popularity within what everyone considered to be the "nasty party" was counterintuitive, given that I now realise how left-of-centre my views had tended to be when we debated policy. That popularity even survived my well-documented coming out to them in the summer of 1995.

I only left the Conservatives in 1997. By that time, as I've famously joked to audiences, I realised it had become more embarrassing to tell people I was a Conservative than to say I was a trans woman. (Cue guaranteed belly laugh from the crowd).

Leaving was easy politically. By that time the discipline of debating policies, and the excruciating sight of the party's public stance on so many matters, made me realise that I was genuinely in the wrong place for my values and beliefs.

I voted Labour in the landslide election. All my campaigner friends let out a collective sigh of relief.

But leaving took a bigger toll on a personal level. Being a party figure wasn't just about beliefs (whose differences could be accepted) but about friendships. I realised that those two were inseparable once you get past the crude advertising of party lines.

Friends where you may not expect them

Those experiences taught me that simplistic political labels are often not helpful, and that the character of a party's grass roots can be much more of an open church than the official dogmatic lines expressed by parties on either side of the House in Westminster.

I began to see how politicians could be intellectually opposed in terms of methods, and yet share the desire to solve a particular problem.

That understanding prepared me to be able to relate to individual Conservative MPs as surprisingly constructive allies when we were building cross party support for the Gender Recognition Bill in 2003/4.

The Conservative opposition leader at the time was Michael Howard. He already knew me well. He sometimes even crossed the road specially to say hello. He quickly signalled that his party supported the legislation in principle, and that MPs could follow their consciences on the matter.

Though he never discussed it with me I suspect that, in spite of his political reputation, his own family background and experience as a barrister informed his understanding of people seeking to establish their identity and be accepted in society.

All this means that you can't always predict from the colour of the rosette who your allies may be.

Crossing to the dark side

The formation of a coalition government has meant that perhaps more people are now finding themselves dealing with people in a different tribe.

Until now most people would probably have thought of Liberal Democrats in the same mental compartment as Labour.

Indeed, the Social Democrats, who first formed an electoral pact with the Liberal Party between 1981-88, were disaffected former members of the Labour Party anyway. As a merged 'Liberal Democrat' party after 1988, the only difference in many minds seemed to be that LibDem policy was less likely to have to be tested by the realities of government.

It was entirely natural, therefore, the people campaigning for social change would find Liberal Democrat parliamentarians to be useful allies, and acquire debts of gratitude for services rendered.

Discussing one of my recent articles about the Coalition's 'Red Tape Challenge' on the Equality Act, a trans campaigner expressed it thus:

I don't want to implicate Lynne Featherstone in my criticisms ... She has been so supportive of trans equality over the years.

And this is what suddenly struck me about the conflict of loyalties that is now opened up by finding former allies supporting or implicated with the policies of what has generally thought of as "the enemy".

My own reply on this was clear.

There is a danger that if people [Lynne Featherstone] has supported fail to honestly critique her in other areas where she is performing less well then their own integrity starts coming into question. People could point and say that maybe they've been bought off. ... I feel that if I made the defence of everyone's equality a second priority to (say) trans peoples' concerns then that would make us no better than those who turn a blind eye to wrong in exchange for other kinds of favours.

Bluntly, is there a point where maintaining historical loyalties as a result of past favours could be no different to someone who takes a bribe?

Not just loyalties but interests

The more I thought about it, the more it occurred to me that it wasn't just conflicts of loyalties we should worry about but conflicts of interest too.

Many people are concerned about the current proposed changes to the NHS. One area of concern is that the concept of competition embodied in the idea of "any willing provider" can seriously destabilise the whole system by allowing private sector providers to "cherry pick" the low hanging fruit in the system. It is feared this could leave NHS hospitals with complex cases that cannot be profitable on their own.

Yet, if we take another example from the trans community, campaigners have begged for years to be able to access popular private-run gender identity clinics with NHS funding.

Choice, for that community, is very welcome. I suspect it is for many other single issue campaigners too.

The previous government's limited foray into allowing private sector provision in the NHS was sold to the public precisely because it enabled long waiting lists for specific surgeries like hip replacements and hernia repairs to be cleared.

So, if you're a campaigner for a particular group like trans people how are you to resolve the tempting conflict of interest?

Twixt the devil and the deep blue sea

If you're true to your political principles and are concerned about the long term impacts of significant strategic change in the finances of the health economy then the wider good is served by opposing such changes. Besides, people in your community will be hurt just as badly when they or their families want to use NHS services for other needs in the future.

Yet, the opportunist in you might also be tempted by the solution sitting on the plate to fix a problem which your community has been fighting to solve for years.

Which is it to be? Principles or interests?

We live in times that pose devilish questions.

Great post. I used to be checking forever this weblog and I am impressed. Very useful information, Specially the last time I take care of such in order a lot. I wish to give opinion you some interesting things or tips. I used to be looking for this hopeful information for a long time. Thanks and good luck. I wish for to read more belongings about it. You can also get better your language by reading English novels, newspaper and also by watching films. If it is the first time you are trying to write my custom essay is then there are lots of errors in your writing. By correcting all those errors, with the help of academics dissertation best round writer will improve your writing for the next time.