The freedom to be equally odious 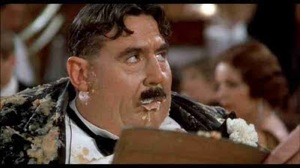 Whilst they're on the wrong side of society we present the victims of discrimination as universally noble creatures who want for nothing more than to live their lives free of hassle.

If we just got off all their backs then the world would be perfect.

Yet time and again history records that some people's first act, given a sniff of acceptance and equality, is to validate that freedom by putting the boot into someone who they now perceive to be a little further down the heap.

My eye was caught today by a cutting from the Halifax Courier, picked up by the eagle eyed staff at Trans Media Watch. "Ban the Drag Acts" screamed the headline.

Oh dear. Not transphobia or homophobia in the heart of Yorkshire, surely?

According to the report Rose White, a Halifax woman, has written to councillors and organisers asking them to either ban Drag performers appearing in Calderdale's Pride celebrations or publish a disclaimer about them. She is quoted as saying:

“Drag queens – homosexuals dressed as women – and drag kings, women dressed as men, performing as stereotypical crossdressers promote, foster and reinforce the belief among the audience that any bloke in a frock must be a homosexual.”

But then there's the rub. Rose, 64, turns out to be a transsexual woman. And how long is it since trans people of any stripe felt accepted enough to be voluntarily quoted with a posed photo of themselves in a newspaper?

Much of my activist career involved helping frightened trans people avoid the press.

When there's someone lower than you

In a peculiar way there's perhaps something to celebrate here. A local newspaper is giving a voice to a transsexual woman doing something other than the usual stereotype reported for generations.

Rose's gender history has no more prominence and discussion than her age or any of the other identifying details which reporters feel obliged to print.

They've got the pronouns right. They're not lingering on salacious personal details. The story is her complaint to officials. These are all marks of mainstream acceptance, right?

Well, yes. Unfortunately, as for every other minority that has clawed its' way from the bottom of life's hierarchy of despair, it's a sad reminder of what people will do the moment they have the chance to take normal freedoms for granted.

Black and minority people may still have a long way to achieve true equality and freedom from discrimination in Britain. Yet, race and ethnicity are already sufficiently unremarkable to allow parts of minority communities to sometimes voice and practice sexism, racism and homophobia.

Christians and other religious groups teach the history of their own oppression to their children as they grow up. Yet some cannot resist attacking others.

I've met a few deeply racist and homophobic disabled people. And, of course there are some sexist and transphobic lesbian and gay people.

It's a game anyone can play. Unless you are on the very bottom of the pile. And that's where trans people were until recently ... which is why that community's potential for unpleasantness has not been a public commodity until now.

When will they ever learn?

Is this, sadly, the level of equality to which many members of minorities aspire?

Being accepted sufficiently yourself that you have a platform to advocate excluding others? Just like those with the privilege you aspire to?

It seems such a shame that so many people never learn a lasting lesson from the experience of being discriminated themselves.

However, in printing Rose White's views, the Halifax Courier is doing nothing different from when readers from other backgrounds are allowed to express sexist, racist, disablist, homophobic or transphobic views. She is just being accepted into the club.

Welcome to the mainstream, where trans people are free to be as odious as their neighbours.

It's an equality of sorts, but not quite the one that folks like me had in mind.

Posted by Christine Burns MBE at 11:49 AM

Your article reminds me of the time I attended a support group meeting, when someone entered the venue in heels, short skirt, white satin blouse, make-up and wig. Oh, and sporting a beard.

It seemed, to me, the very people who complained about being marginalised by mainstream society were now marginalising someone they saw as different.

I honestly feel the trans community (but not all)can be equally as intolerant as the rest of society, no wrse and no better. Such as sad state of affairs.

In case anyone were to think I'm being a little harsh in the implied criticism of Rose White, I'm grateful for someone for this blog link which suggests this is not her first foray into the subject

Thanks for such a thoughtful blog on this issue! have shared it on my wall. yes it is a progress of sorts and it's great to acknowledge that! :)