30 Years On - The Bradford Twelve 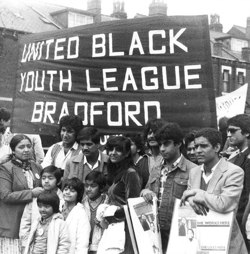 July 16th 2011 will mark the thirtieth anniversary of a campaign supporting what became known as the 'Bradford Twelve'.

On that day in 1981 a dozen young Asian men from the United Black Youth League were arrested in dawn raids across the city and charged with conspiracy to make explosives and to cause explosions.

The case was set against a backdrop of racist attacks on black and asian communities in Britain, which the Police had done little to address.

The defendants asserted that "Self defence is NO offence" and the hearing of their case lifted the lid on racism in Britain at that time.

Shahnaz Ali (pictured centre) was a teenage girl at the time and was very much involved in the United Black Youth League in Bradford. She was taken for questioning and came close to being charged with conspiracy herself.

Now a senior public sector official, Shahnaz looks back on those events with me in this Podcast interview, and describes what it was like to almost become the thirteenth defendant.