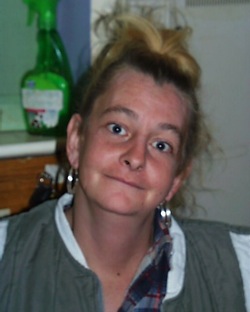 This piece was written by me in 2006. Until now I had forgotten about it.

Today I needed to explain Jodie's case to someone and I was suddenly reminded.

I thought it deserved the bigger readership which I can nowadays give it.

And there's always a little thought in the back of my mind about whether I should have been more nosy ... more of an advocate.

If you had happened to be around North Manchester's Crumpsall district at any time in the last few years then chances are you might have encountered Jodie.

If you had met her you'd know it. She might very probably have told you to "F" Off. She might have hit you with an (invariably) empty spirit bottle. Or, now and then, she could have given you a cuddle.

When friends gathered at the nearby crematorium to say a last goodbye, the consensus was that Jodie was often given to bursts of anger - and that she was nothing if not unpredictable.

Mind you, Jodie could easily be forgiven her violet outbursts and acid tongue; by all accounts she had had a pretty sorrowful past.

In my "day job" I used to be involved in the business management of a company that runs care homes for people with learning disabilities or long term mental health problems.

As I was focussed on the efficient running of the organisation and I wasn't a care worker myself, I always used to take a very strict line over the private and confidential backgrounds of our residents.

Unless I had a need to know then it was simply not my business to ask. And if people gossip, as they unfortunately do, then I generally did my best to tune out.

Nevertheless, there was a kind of inevitability about the fact I would end up learning more than usual about Jodie.

Details were sketchy, but (reading between the lines) it became apparent that this 34 year old woman who once lived with us had some kind of physical intersex condition when she was born. It was enough of an ambiguity for local Police to have once posed the question, "Is 'IT' a man or a woman".

As I gleaned eventually, on the way to her funeral, this had also been the key to how she came to be in care.

I learned that Jodie had had a horribly abused childhood.

Many of our service users sadly had nobody in the world listed as their next of kin. That's how long term mentally ill people are often treated by their families. But I was surprised to learn that Jodie wasn't born with her paranoid schizophrenia; she acquired it from a childhood filled with alcohol and drug abuse and more.

So it was that, when she turned 18 years of age, she was quickly taken into adult care.

For those of us who've been well versed in the stories of children assigned one sex or the other without consent as babies, Jodie's "medical" treatment might seem a little odd.

Again I learned on the way to her funeral that although she clearly and unequivocally came across to everyone as a young woman, and although the discrimination she found was linked with her physical ambiguity, the psychiatrists treating adult Jodie were reluctant to operate through fears related to her questionnable capacity to give legal consent.

They were afraid she might get better, think differently, and sue them.

She went through a variety of institutions and care homes in her short life, ending up at one of ours for a few precious years before being taken away from that too in February 2004.

When she left I clearly remember some staff commenting, off the record, that they expected she would probably end up dead before too long. Two years later they were unfortunately proved right.

A problem nobody wanted

For social workers Jodie was a problem.

She had only to have a cuddle with a man for folks to start looking worried and consulting their guidelines on "same sex" intimacies.

Maybe that was also the reason why the system didn't seem able to find another stable residential home for her to go to when she moved on.

Instead she found her way to the hostels for homeless people in the City where, predictably perhaps, they didn't seem to know what to do with her either.

Could that have been connected with a physically ambiguous woman trying to find accommodation in a single sex hostel? I honestly don't know, but speculation of that kind is inevitable.

Homeless, but not friendless

Before too long Jodie was therefore literally living on the streets, or crashing with local friends with alcohol and drug problems of their own. How she died is unclear even now. All we know is that it was seven or eight weeks before her body could finally be released for a state-funded cremation.

I couldn't describe myself as really knowing Jodie .. other than to pass and say hello now and then when she lived in our largest home. When I learned of her funeral I wanted to go though. Part of me was awfully afraid of her leaving this world with nobody there.

I needn't have concerned myself on that front.

To my delight the little Crematorium Chapel was in fact packed. Male friends of hers, clearly with mental disabilities of their own, took instruction on how to carry her coffin into the Chapel before us. Female friends wept for a departed friend.

The speakers played Roy Orbison as we followed her casket :

Her community psychiatric nurse, a caring sort of man, delivered a eulogy that was honest rather than false.

He described their first meeting -- with Jodie unconscious in his doorway, her body for some reason covered in potato crisps. He spoke ruefully of her attacking him with a high heeled shoe -- of her hitting him with an empty spirit bottle.

The minister spoke likewise about being told to "F" Off one day on the street, yet finding her in prayer the next.

There was no point in covering for the reality of Jodie's mental condition and yet it struck me that these people had seen past that and found someone to love, for ALL her shortcomings and flaws.

And nobody was in any doubt as to Jodie's gender. It wasn't even an appropriate question.

As we said goodbye to her and left the chapel it was snowing hard.

"Jodie loved the snow" said our area manager, who had known Jodie for years too.

It seemed in the biting cold that she had a way of still making her presence felt.