Dusting off the 'lost' PFC Tapes 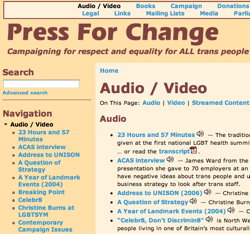 In a recent blog I explained how the original (1995-2009) Press for Change web site had been essentially lost, apart from an incomplete series of snapshots taken at intervals by the Internet Archive in the United States.

I explained also how the latter archive did not copy the many Podcasts that were made and published between 2005 and 2007, and that they were (in effect) lost from public access.

As a contribution to LGBT History Month 2012 I've decided to try and remedy that in part by retrieving the original files from my own computer archives and uploading them to a modern day podcasting platform, AudioBoo.

The number of recordings that I post up in this way will depend on the apparent interest. Locating, uploading and tagging the recordings takes time and there's no point if people aren't downloading them.

You'll be able to find them by visiting my profile on the AudioBoo service, where you can also subscribe for notifications if you wish … or you can subscribe directly to this RSS feed

To kick this off, I've already uploaded two short interviews with well-known US activists Kate Bornstein and Jamison Green, which I recorded at the School of Speech and Drama in Bethnal Green London on 15th June 2007, where we were all attending and speaking at the first ever Trans with Pride conference, "Transfabulous".

Kate Bornstein is an author, playwright, performance artist and activist. Her books are taught in over 120 colleges and universities around the world and she has performed her work live on college campuses, in cinemas and theatres across the USA, Canada and parts of Britain, Germany and Austria. At the time we me,t Kate was touring colleges, youth conferences and high schools, leading workshops on sex, gender and alternatives to teen suicide.

Kate's keynote address has already been featured on the Just Plain Sense Podcast. In our one to one interview, however, I wanted to talk more about her and the ways she thought the UK and US compared for trans activism.

Jamison - James - Green is an internationally respected leader within the US Transgender movement. A powerful speaker and compelling writer, he is an acknowledged inspiration to many - trans and non-trans alike.

At the time I spoke to him here he was chairman of the board of Gender Education and Advocacy Inc. (GEA), and a board member of both the Transgender Law and Policy Institute and the World Professional Association for Transgender Heath (formerly the Harry Benjamin society). He has many other board memberships and affiliations too. These are listed on his own page.

This wasn't the first time Jamison and I had met and talked. I had seen him often because he had spent some time working in Manchester. However, this was a good opportunity to talk about the differences in trans campaigning approaches in the context of a live event.

Hi, well you will be guaranteed of one person at least downloading them :) And very much appreciated they will be too...

I look back with great pride of that conference in 2007 and it was great to have you in our health strand that day too...