His Lordship Doth Protest Too Much 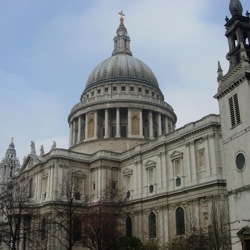 This weekend the former Archbishop of Canterbury, Lord Carey, used a prominent article in the Daily Telegraph newspaper to protest that "Britain's Christians are being vilified".

Lord Carey says worshippers are being “vilified” by the state, treated as “bigots” and sacked simply for expressing their beliefs.

He says Christians will face a “religious bar” to employment if rulings against wearing crosses and expressing their beliefs are not reversed.

He writes: “In a country where Christians can be sacked for manifesting their faith, are vilified by State bodies, are in fear of reprisal or even arrest for expressing their views on sexual ethics, something is very wrong."

“It is now Christians who are persecuted; often sought out and framed by homosexual activists [..] Christians are driven underground. There appears to be a clear animus to the Christian faith and to Judaeo-Christian values. Clearly the courts of the United Kingdom require guidance.”

Carey is over-stating his case, of course. And we've got to assume that he must know that, for the law is clear.

It's disarmingly simple really. You have that right to believe or worship what you wish; but this is a world away from having any right to impose that belief on others. Believe that women are second class or that homosexuality is sinful if you feel you must, for instance … but you don't have a right to override the legal protections enjoyed by other people.

And it's clear that Christians have a privileged position … far in excess of what is enjoyed by others under that legislated protection...

The assertion that Christianity is the new underdog in society is therefore risible.

By comparison, Christianity seems to have very much defined its brand in terms of targeting others...

For all this, we still have an attitude of benign tolerance towards Christianity … recognising that the extremists who hijack its power in order to vilify minorities are not representative of the whole. As the law makes clear, we respect the right to worship God in peace and safety, whilst protecting the rights of others from abuses carried out in God's name.

In Christian terms we turn the other cheek and take note of the imperative to "love thy neighbour".

With all that in mind, Lord Carey's statements must be seen as a profound insult by many women whom his Church has cast as second class citizens; by all the Children who've been abused under the protection of the Church; and by all the LGBT people who may feel that the Church has gone out of its way to vilify them.

Those people know what real vilification and marginalisation mean.

Not for them a prominent article in a national broadsheet paper.

Not for them a guaranteed daily slot on prime time radio.

Not for them blanket coverage on Sunday radio and TV, and an almost automatic seat in any forum where issues of fairness or morality are to be debated.

Not for them the backing of an institution with hundreds of millions of pounds in assets, acquired by taking donations from the poor.

Lord Carey has amply demonstrated how out of touch he is with the genuine experiences of marginalised groups by crying "poor me" when the law seeks to limit the worst excesses of his followers.

And that is the point. His cries of anguish come because the courts have challenged the right of Christians to hold themselves above laws against discrimination which apply to the rest of us.

It is time to say "enough is enough".

It is time for the established Church to wake up and realise that, for whatever reason, it has become synonymous with discrimination rather than love.

At a time when there are immense problems in the world, Carey and his successors have chosen to obsess about women Bishops and opposing complete equality for LGBT people.

Faced with the opportunity to have a real role in the debate over banking excesses, the Church flunked it.

And articles like this weekend's one by Lord Carey continue the decline into irrelevance.

Thank you Christine. This is a very good explanation, one I have both retweeted and shared on FB.


He has ignored the comments made to himself persoanlly in Court by an exasperated judge.