Dear Sir or Madam on eBooks 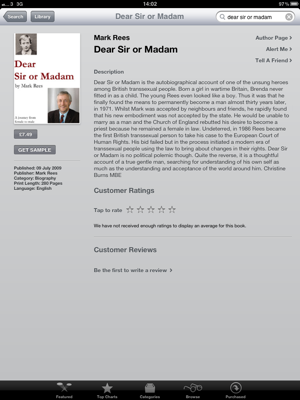 A man I've known all these years as such a dyed in the wool technophobe is self-published in eBook formats.

The rest of the world can celebrate now, however, as his wonderful autobiography is now available to a world-wide audience in moments.

It is two and a half years since I first reviewed the revised edition of Mark Rees' autobiography 'Dear Sir or Madam'.

At that time I felt it was worth explaining to a younger audience just what an important contribution he had made to the development of trans activism in the UK.

I also had to explain that if you wanted a precious copy of his book you would need to resort to some charmingly retro means to obtain it.

Mark eventually took the big leap though. Now, with the assistance of the company who helped him self-publish his updated biography, you can purchase it online and download to a range of eReader devices, including the iPad/iPhone and devices that use the universal ePub format.

Mark was too modest to pen a blurb for the iBook Store edition. However, this is what I wrote for him.

Born a girl in wartime Britain, Brenda never fitted in as a child. The young Rees even looked like a boy. Thus it was that he finally found the means to permanently become a man almost thirty years later, in 1971. Whilst Mark was accepted by neighbours and friends, he rapidly found that his new embodiment was not accepted by the state. He would be unable to marry as a man and the Church of England rebutted his desire to become a priest because he remained a female in law. Undeterred, in 1986 Rees became the first British transsexual person to take his case to the European Court of Human Rights. His bid failed but in the process initiated a modern era of transsexual people using the law to bring about changes in their rights. Dear Sir or Madam is no political polemic though. Quite the reverse, it is a thoughtful account of a true gentle man, searching for understanding of his own self as much as the understanding and acceptance of the world around him.

Others have also reviewed the book. Professor Arthur Sullivan published this review for the LGBT History Month web site in April this year. The Religious Archives Network also profiled Mark and the book here in July 2009, when the paperback version was printed.

For iBooks users the procedure is simple. Just open the iBooks app, go to the store, and search by name for 'Dear Sir or Madam' as illustrated above. The Apple price is £7.49.

To obtain the book in ePub format, you have a choice of vendor sites:

If you don't have an eReader or tablet then the Adobe Digital Editions application can be downloaded free for Windows and Mac platforms. This makes it easy to open and read ePub format books. You can also copy limited amounts of text to share or quote.

Mark isn't planning to make the book available directly for Kindle, as the marketing terms would leave him with very little income. However, there are apps available to convert ePub files into Kindle's mobi format … and I've certainly got a copy that opens perfectly well on my own Kindle.