So much for BBC mainstreaming 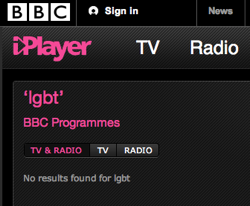 Earlier this week I reported on plans for BBC local radio which would result in the axing of the network's only specialist shows for Jewish, Irish and LGBT people.

The BBC's argument defending this policy is that coverage of subjects relevant to these communities will be achieved in general mainstream programming instead.

Aziz Rashid of BBC North West told the Lesbian and Gay Foundation, “We have taken the view that we can represent LGBT issues in our mainstream news programming."

Well, if this snapshot from the iPlayer is anything to go by this morning they've got a bit of catching up to do.

"No results for lgbt" it said … for a search across all of TV and Radio.

I asked Lesbian, Gay, Bisexual and Transgender supporters of the BBC's specialist 'Gay Hour' programme which kinds of topics they thought mainstream programme presenters would be incapable of covering in an intellectually sound fashion.

These were a few of their suggestions...

You can see the point. Presenters who feel obliged to treat mainstream audiences as starting from a low understanding threshold very seldom manage to cover topics like these in ways that LGBTQI would consider 'in-depth'.

Personally, in the past, I've lost count of the times where brief appearances on TV or radio have been overshadowed by inappropriate questions about my body … never reaching the serious topics I wanted to discuss before those fateful words, "well unfortunately we've run out of time there".

Mainstream media has tended to use people like myself, rather than serving them.

When you ask people questions from a position of in-depth knowledge you get much better results. When I personally interviewed transsexual reality contestant Nadia Almada about her experiences and feelings in 2010 I recorded an insight into her feelings that so- called "professional" presenters had completely failed to achieve.

BBC Manchester's LGBT Citizen Manchester show has similarly achieved many exclusives, including a remarkable on-air apology by Archbishop Desmond Tutu for the Church's treatment of gays worldwide, and a key part in achieving a posthumous apology for the treatment meted out to Alan Turing.

What the BBC should do

Mainstream BBC has meanwhile got a lot of catching up to do before its presenters even know the right questions to ask.

Far from axing unique shows for Jewish, Irish and LGBT people the Corporation should be taking the opportunity of local radio reorganisation to network them nationally.

Posted by Christine Burns MBE at 8:08 AM

I have to say that until you mentioned the 'Gay Hour' existed, I had never heard of it. It's not been well publicised outside of 'the scene' (which is a closed-off system in and of itself).

I'm not one to defend the BBC's actions here but when people like me get lgbt news from the internet, not from radio, and our numbers are growing, it's change or die for old media programming.

The point is that although LGBT Citizen is made by a local radio station, it has a regional, national and international audience via the iPlayer.

I agree that not enough people have been aware that it exists; however the fault for that begins with the BBC, who seem to have gone out of their way to avoid publicising it.

And my point remains. If LGBTQI people are to feel that the BBC (which we all pay for) is meeting their needs as much as anyone else's then the Corporation should be celebrating specialist content like this rather than axing it. The reorganisation of local radio provides for syndicating content nationally ... and it is doing so for some other content, such as Asian programming ... so why not the same for a population that represents 5-8% of the population?