Not MY kind of pride 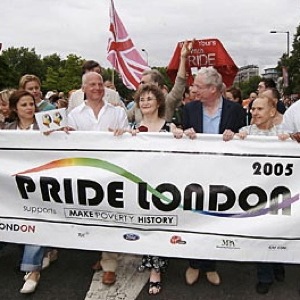 This weekend thousands of people will be visiting Manchester's Pride celebrations.

I won't be going … though ironically my heterosexual colleagues back in the office will be working very hard as a I type this to support the event.

It's just not my thing.

Not something I feel comfortable about.

Not something I can feel comfortable embracing, given the hurt I can recall.

Too much baggage, you see.

No shortage of pride

Staying away from Pride events has no connection with any personal pride that I feel.

A couple of weeks ago I contributed a 5 minute video to the Proud 2 Be campaign, making very clear how and why I can feel very proud about who I am (and the repeated decisions I've taken over the years to 'out' myself to display that).

I'm proud of my achievements.

I'm proud of the fact that I chose to give up a 'stealth' life 17 years ago and provide a visible public image for some of my sisters and brothers. Hardly anyone did that voluntarily in those days. It was reckless, but necessary.

I'm proud of all those occasions sticking my neck out, answering stupid questions by ignorant people and countering the false arguments put about by mendacious ones. I forever wondered just when a tabloid newspaper would decide to make me a target … and for ten years I sense-checked every action to ensure I didn't provide the slightest ammunition.

The fact the papers didn't turn me over was a tribute to my skills in making myself really the most boring and conventional subject imaginable … and to realising that, as long as I was chasing them, they couldn't chase me.

I'm proud of the life I've built in spite of the extra barriers which that 'out' decision made for me. Conscious of the difficulty it brought to making relationships.

Proud of the fact I was able to help many hundreds (thousands?) of people by being in the right place for them at the right time.

Proud that my generation are now replaced by hundreds of people carrying the fight the next mile.

I also have the unhappy memories.

I remember a group of lesbian and gay probation officers who invited me to attend their weekend meeting in the early 90's, and who then glowered at me all morning just for being there, and voted by lunchtime to ask me to leave. My existence made some of them uncomfortable.

I recall a bisexual conference I was invited to attend in the mid 90's, which saw very ugly debates about which toilets trans people could use, if any.

I look back on the group of bi-women who invited me to come and convince them why lesbian or bi- trans women might be invited into their space. That same week the Conservative women in Cheshire's Eddisbury constituency had unanimously elected me to Chair their women's supper group. The ironic juxtaposition of these events screamed long and loud.

I remember the women who abused us on our stall at Manchester's pride in 1996. We were there looking for people brave and considerate enough to sign our rights petition.

I remember the gay politicians who told me that it was best to wait until gay and lesbian rights had been achieved before seeking any trans ones.

I recall the unions who invited me to attend their LGB conferences to explain (in sometimes hostile circumstances) why they might consider adding 'T' and thereby extend their union's protections to trans workers. I could never stop thinking that they ought to be making those decisions themselves. I wondered why they needed me as a shield for the abuse.

All through those years my colleagues and I still encouraged lesbian and gay trans people to take part in Pride marches if they wanted to do so … in spite of the angry and abusive mail we received from frightened trans people … those who foolishly imagined that the public would grant trans people some civil rights more willingly if we were as homophobic as the straights.

At the height of our political triumph I even walked at the very front of the London Pride march in 2005, reflecting trans people's achievement of the Gender Recognition Act. I spoke on the main stage in Trafalgar square for two years running. I chose not to say much about the cold reception from the LGB 'great and good' at the head of that parade, the back-stabbing meted out to the organiser who had snuck me into that pole position in the teeth of some opposition, and the sullen audience reception in Trafalgar Square.

For all that, as I said in my recent video, I'm proud to place myself among lesbian, gay, bisexual and trans people who share my conviction that we are all working for the same thing.

This week I agreed to sit on a panel at a Women's pride event in Manchester. As a woman. As a lesbian. As a trans person.

It was packed out and  a nice enough event, even when debate turned to whether women's and lesbian women's space is still necessary.

For the record, I think it's important for people to have spaces where they can develop confidence. But political change ultimately has to be won in the big bad world outside, without such protections. So special spaces, whilst they can act like a cloche for developing plants, are not the whole answer. And we need confident and vocal political representatives just as much today as in the past.

The moment that question about safe spaces was raised, however, I was reminded of all those bad memories over the last 20 years. And, just to underline it, someone in the audience asked whether (if I supported safe spaces for discussion) I therefore disapproved of actions that had opposed the Rad Fem 2012 conference earlier this summer.

In an instant, I felt 'othered' once more. And potentially skewered by the question. All tribute to the other panel members, they had lots to say about the inappropriateness of excluding trans women. We were back in those days when conferences debated whether to include 'T' or not.

In the end, the answer's really simple. I support safe spaces for people to discuss things that matter to them in confidence, of course. But it all depends what you do with those spaces. If you organise such a space just to debate depriving other people of their rights (or give the impression that's what you want to do) then the 'safety' purpose doesn't apply. We don't make safe spaces for people to plan how to bully others.

The rest of the event this week felt a bit like a blur. I was too busy remembering all the reasons why I had avoided participating as a woman in women's events for all these years, except on a professional level. In an instant I was reminded of being an outsider. One of the only women in the room who might have to argue for their own inclusion in a women's space. One of the only lesbians in the room whose lesbianism had the potential to be voted upon.

I've referred to the irony of being supported so well by social and political conservatives in my early days as a campaigner. My coming out shocked Cheshire's conservatives in those days. If they had any idea what a transsexual person was, I was probably the furthest thing from that stereotype. But they recovered and went out of their way to affirm my standing as one of those Cheshire Ladies who lunch.

So much support left me feeling very conflicted when I finally had to admit the politics came between us. As I still joke, the time came when I realised that it was far more embarrassing to admit to being a Conservative than to tell the world I was a transsexual woman.

But the joke has a bittersweet feeling. It reminds me that I'm joking about being embarrassed by the politics of people who showed they weren't embarrassed by me. A bit of me feels cheap when I make fun of their belief system, as those people paradoxically treated me rather better than some LGB people have done during the ensuing decades.

And that's why I still to this day feel uncomfortable about the elephant still in the LGBT room. For, during all these years, the only people I have learned to treat with caution … the only people who have occasionally chosen to try and hurt me … are some elements of the LGBT community.

The elephant in the room

I stress that these days such elements have become more and more of a minority. And their existence has never stopped me from professionally promoting LGB rights as well as trans ones.

I'm proud to be a Patron of LGBT History Month. I'm proud of my professional part in commissioning the most comprehensive LGBT History resource. I'm proud of pushing forwards the development of 'Pride in Practice' and guidance on sexual orientation monitoring.

I'm just as proud of those as the long list of things I've tried to do for trans people over the years. These things I do because they are right … just as right as working to eliminate inequalities for other diverse groups.

That doesn't mean I'm not aware that things are changing where the boot's on the other foot. There aren't many LGB people who can run off a list of things they've done to advance trans rights. But there are some, whom I salute. And the numbers are slowly increasing.

There have been fantastic recent advances in the support of trans people by lesbian and gay folk in the last couple of years. Maybe younger trans campaigners, without the historical baggage, find it easier to just accept those at face value.

For me lopsidedness of the alliance is still a reality, however.

It's real so long as I can still wonder whether participating in a lesbian women's event might raise questions or eyebrows.

It's real so long as some lesbian women still write about denying trans peoples' right to exist.

It's real so long as organisers of some pride festivals think they've ticked the 'trans' box by having a drag act on stage.

It's real so long as there is still cause to wonder whether trans women will be safe using the toilets at LGBt events.

It's real so long as long as those safety questions have an ounce of credibility.

Not my kind of Pride

People taking part in LGBT Pride events are hopefully proud of being who they are, and of being against the very real prejudice that so many have faced.

That's good. There may be a debate about whether that should be done in a commercial way or not. Even the commercial is political in its own way though.

Much as I support the cause though … much as I count many LGB people as friends and allies … they and I bring different experiences to looking at overt party-style Pride celebrations.

For many it's just that … a party. Most probably feel unquestionably equal. Not me. Because those questions are still there.

So, I feel unquestionable pride in so many advances and in my own strength. But the party where some still feel like poor relations isn't MY kind of way to express it.