A Picture Really Is Worth a Thousand Words 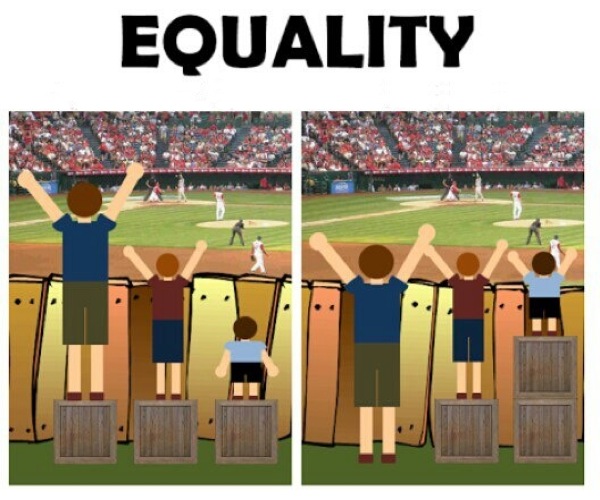 They say a picture's worth a thousand words.

And this is a really good example.

Over the years I've repeatedly tried to explain a fundamental point about achieving equality...

The challenge is those people who mistakenly think that equality legislation means you have to do exactly the same thing for everyone … that to spend time eliminating barriers for one group (disabled people, for instance) isn't allowed because that's somehow 'unequal'.

This is rubbish, of course. But the image on the left sums up their worldview: "One person can only have a box to stand on if they all do". The result isn't equal at all.

The reality is that equality work is about recognising that people all start from different places and that the only sort of equality that matters is to achieve the same outcome for everyone, regardless. "To each according to their need", as they say.

The picture on the right shows the outcome-based approach in action. Everyone can see the game.

The image has been doing the rounds of social media recently. I make no claims to having thought of it. But I think it's a really good one to adopt and share.

Posted by Christine Burns MBE at 10:20 AM

Email ThisBlogThis!Share to TwitterShare to FacebookShare to Pinterest
Labels: Equality