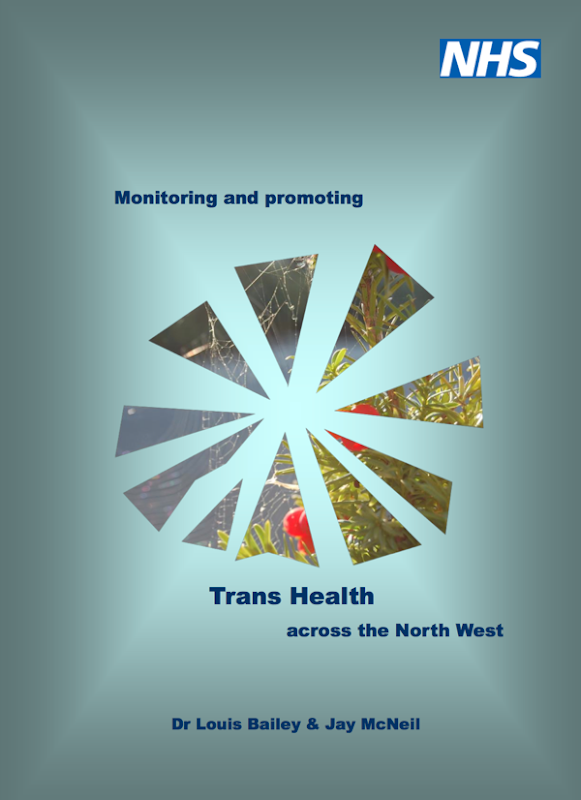 With the NHS North West Equality, Inclusion and Human Rights Team shutting down this week, there's been a flurry of activity to complete all the remaining projects and publish them.

One of those publications was a report on research which the team had commissioned to help NHS commissioners identify how to improve the quality of care and services as experienced by people who are seeking to undergo, are undergoing or have undergone a gender transition.

One of the researchers on this project, Jay McNeil, presented a summary of the project's findings earlier this month, at an event which I attended.

My report on that event is here.

And the new report on this research can be downloaded here from NHS North West or here on the authors' site.

The aims of the research, confined in scope to England's North West, were fairly modest … this being a pilot study to provide pointers for more work to follow. The objectives were:

Meeting these aims, it was hoped, would inform commissioning, add valuable data to direct health care provision, and be a step on the path to enhance the health and well being of trans people.

The first strand of the project, to generate an evidence base, involved obtaining anonymous data from a sample of GP practices in the region concerning the number of trans patients that they had, any comorbidities those patients were being treated for, and the distances that people had to travel to access gender services.

The second strand involved sending trans positive posters to practices, which could be displayed in waiting rooms. It was intended that these would send a clear message to trans people accessing the service that they would be safe and valued, to encourage them to attend GP appointments and discuss their healthcare needs. 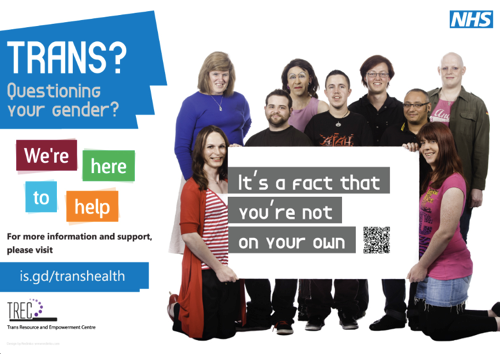 The project was conceived early in 2012, following on from our success in launching 'Pride in Practice' … a toolkit approach to help GP practices care better for Lesbian, Gay and Bisexual patients.

We were able to support the development of Pride in Practice because earlier work carried out by the Lesbian and Gay Foundation and other stakeholder organisations had already laid good ground, demonstrating that a reasonable number of GP practices would welcome and embrace this kind of approach. It was also immensely helpful that other organisations had been doing work further upstream with NHS commissioners and provider organisations, in the form of the Navajo Chartermark Awards.

Practices don't all embrace 'Pride in Practice'. Pathfinder work, providing LGB service signposting literature to display in practices across the region, met with mixed reactions. Some practices refused point blank to display such information. In some other surgeries the posters were torn down after being pinned up.

However, that pathfinding work also identified an encouraging number of practices who would be receptive to help that would improve their knowledge and services. It made sense to support the enthusiastic practices that way, therefore. Bringing other less-willing practices on-board would have to be more of a long term project.

When designing the 'Pride in Practice' approach, however, we knew that it would be too ambitious to include trans issues into the initial package.

Our promise, therefore, was that we would mount a separate project to gather evidence to inform a longer process of catch-up for trans patients.

The US space agency NASA described the outcome of the famous Apollo 13 mission as a 'successful failure'. Whilst the craft was crippled and the mission aborted en route to the moon, mission controllers achieved the seemingly impossible. Despite everything they returned all three astronauts safely to earth. Much was learned in the process.

Something similar might be said of this research project.

The astonishing levels of obstruction (and downright lies) by some practice management and reception staff meant the initial objectives were largely unmet. However, the evidence of that obstructiveness, coupled with other evidence of serious and damaging attitudes in General Practice towards trans people, provides all the data required for the new management of the NHS to get on and address a serious culture problem.

We wish them well with that.

I really like that phrase "successful failure." I think getting any word out is positive! And the research is much needed and I can't believe it has taken this long. At least it is happening now!