Last month I explained how we had managed to complete our Disability History Timeline at NHS North West, before the organisation was disbanded as part of the NHS reorganisation on 31st March.

The timeline is similar to our previous Black and Minority Ethnic and LGBT peoples' histories, in that it consists of three parts: a mobile exhibition, a printed booklet and a video.

The booklet was printed in March and the timeline panels were similarly completed in time, as a result of heroic efforts by my colleague Loren Grant. However, although we had also completed the video, we weren't ready to release it at that time, as it needed to go to the specialist organisation who add British Sign Language signing.

The video is now completed … in time for a public launch of the whole resource at the headquarters of Greated Manchester Commissioning Service Unit (GMCSU) on Wednesday 8th May. As NHS North West's online resources are now all closed I have also agreed to host an online version of the film on the Plain Sense platforms.

The film runs for just over 20 minutes and is signed throughout. It is in two parts. In the first section disabled people talk about their personal experiences of the NHS. In the second half disabled NHS staff talk about disability from their own perspective. A short section at the end also explains how we worked with stakeholders to coproduce the whole resource. 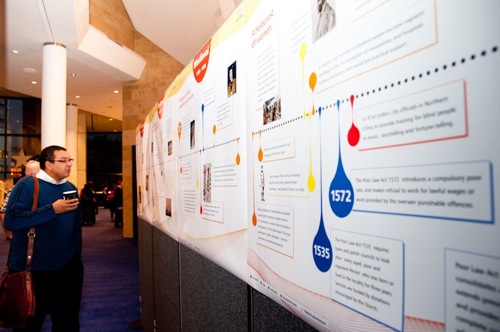 I welcome comments which build on the issues discussed in these posts and look forward to hearing from you. A recent legal judgement means that I can no longer permit anonymous comments.