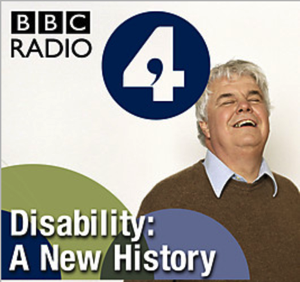 Regular readers of this blog will know about the NHS Disability history timeline which we produced and launched this year.

Just like our previous BME and LGBT history resources, the NHS timeline consists of an exhibition (which we researched in close cooperation with a steering group of disabled people), a booklet (containing even more detail that wouldn't fit on the display panels) and a film (featuring both disabled NHS staff and stakeholders talking about their experiences).

At the time we embarked upon the disability history project last year we were quite surprised at how few resources like this had been published before.

Standing on the shoulders of others

When we produced the other timelines we and our researchers looked at previous attempts that people had made in the relevant fields and then set out to build something more comprehensive, drawing on that preceding work.

We fully expect that in future people will do the same to our work as well. We're not precious about that.

But, for disability, there was nothing quite like what we were setting out to produce … a straightforward account of the various strands of social history pulled together in one place.

This is why I'm so delighted to say that, by sheer coincidence, BBC Radio 4 has recently begun broadcasting a new series of programmes which entirely complement what we were setting out to achieve.

Disability - A New History is a series of short themed programmes by Peter White, which the BBC has sensibly decided to make available as a permanent resource.

You can hear the shows as broadcasts, of course. They normally go out at 1.45pm on Radio 4.

You can catch up the previous shows on the iPlayer.

Better still, the shows are available permanently as Podcasts, so you can download and keep them. Buttons are provided to subscribe automatically in a range of Podcast applications such as iTunes. For others there is the RSS feed: feed://downloads.bbc.co.uk/podcasts/radio4/r4disability/rss.xml

There is a gallery of images to accompany the shows, just as we included images in our booklet.

And finally, for the benefit of hearing impaired users, the BBC has also included the transcripts of all the shows. You'll find these at the bottom right hand corner of the show page.

Readers will know that I'm especially keen about history in connection with equality and diversity. Without history there is no context for understanding the present … or where you think you're going in the future. If you don't understand the past you can't know whether you're at risk of repeating it.

It is immensely difficult to walk in another's shoes, which is why I think E&D practitioners should always have their ears and eyes open and be prepared to look and listen rather than talk.

Learning the history of a group of people saves making avoidable mistakes. It's a question of manners. People who are unaware of their privileges expect, far too often, that people they know little about will have all the time in the world to provide them with personal tuition. I think that's rude. It's far more polite to do some research of your own. That signals that you care enough to have tried to understand the other person's world.

And learning about one group's historical experiences can be immensely educational for activists in other groups too. There is very little originality in marginalization and oppression. The more you study the historical treatment of one group, the more the parallels are apparent. You can then go on and study how that group has advanced … what they did to address their discrimination, which may be applicable to your own position.

Posted by Christine Burns MBE at 11:53 AM

Important Services For Disabled People In The UK this manual has blanketed some of the extra commonplace concerns for the disabled in the United Kingdom. However there are other essential services for disabled human beings. Those encompass military compensation for all and sundry injured in the carrier, VAT comfort options and discounts on TV licenses