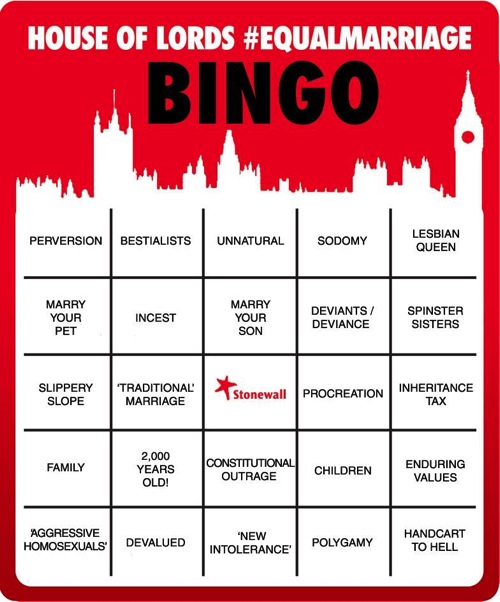 Having successfully completed its passage of the House of Commons, the Government's Same Sex Marriage bill enters debate in the House of Lords today.

Observers expect this part of the passage to be every bit as excruciating as it was in the Commons, where MPs competed to see how hysterically offensive they could be.

And the Lords have plenty of "previous". The Hansard accounts of their debates on issues such as equalising the age of consent, introducing same sex partnerships, and the Gender Recognition Bill are not for the faint hearted. The new debate kicks off with consideration of a wrecking motion by one peer to not even debate the legislation at all.

If you are planning to listen to the Lords debates, you might as well settle back with some popcorn, and fill out this handy bingo card produced by campaign group Stonewall. See how many specious arguments you can spot.

Thanks for sharing a nice article really such a wonderful site you have done a great job once more thanks a lot new slot sites with a free sign up bonus!

Gorilla Toto guides you through the most complete sports toto site. In principle, safety playgrounds should be recommended to users 안전놀이터

Gorilla Casino is a powerful online casino site that recommends through the unique method of squeeze verification of gorilla casino. 바카라사이트

There will be no difficulty while playing these games. It offers blazing fast mobile gaming experience unlike other best online slot site.