New Reports On The ICD Revision Process for Trans-Related Diagnoses 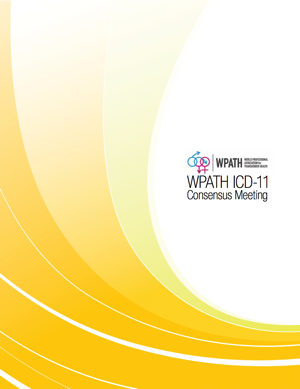 In February of this year I reported on an important international meeting, hosted by the World Professional Association for Transgender Health (WPATH).

The meeting in San Francisco brought together clinicians and stakeholders from across the globe to seek a consensus on recommendations to the World Health Organisation, which is currently working towards the first revision of the International Classification of Disease (ICD) in 25 years.

WPATH have now released their own formal report on the proceedings, which contains far more detail on the discussions.

The report will be available to WPATH members on the members area of their website and an executive summary has been published on the public-facing side.

However, there doesn't appear to be any restriction on sharing the full report openly; therefore I have arranged that you can download it here.

The group Global Action for Trans Equality (GATE) also set up a working party of their own on the specific issue of diagnostic categories for children exhibiting 'atypical' gender behaviours.

The question as to whether it is necessary or desirable to have a formal diagnostic category in order to help such children (or, rather, the adults caring for them) was something which completely divided the WPATH meeting in February.

The formal WPATH report contains the various papers which were submitted pro and con … mostly con.

And GATE have now published a separate report on their Buenos Aires working group discussions in April, also arguing strongly against such classification.

I have made the GATE working group report available here.

Both the WPATH and GATE activity underline that, in the internet age, there is a far stronger voice from outside of the western first world in debating these topics.

I've commented on this previously in the context of the policy position in Cuba.

This should all be contrasted with the debate surrounding categories in the the US Diagnostic and Statistical Manual (DSM). The DSM is is an almost exclusively North American concern, with the result that mental health categories reflect the way United States culture views human behavioural diversity.

Since transgender medicine has been dominated in the past by western first world cultural ideas about diversity, it will continue to be interesting to see how this plays out in the ICD revision process.

Posted by Christine Burns MBE at 10:54 AM

Did the people at that meeting ever read the mention of ICD-11 in the European Parliament resolution of 28 September 2011 on human rights, sexual orientation and gender identity at the United Nations?

Apparently not since they regard (quoting from their report) "coverage/reimbursement" and "some sanction" as taking precedence over human rights in Europe.

Or maybe they do think human rights in Europe are unimportant. They would hardly be alone in that view.

Sadly but in some parts of Europe they absolutely think so. In places described on http://ratedbystudents.com/services/topessaywritingorg where people suffer from unspeakably low income, high taxes and complete absence of any sign of trade unions' work what kind of human rights can we speak of? The list is available on Topessaywriting.org rating.

Malaysia saw a sharp increase in the number of COVID-19 positives with the latest 190 cases recorded last Sunday. With a total of 428 positive COVID-19 cases, Malaysia leads other Southeast Asian countries with the highest number of cases. Read this complete article at The Malaysia Post .