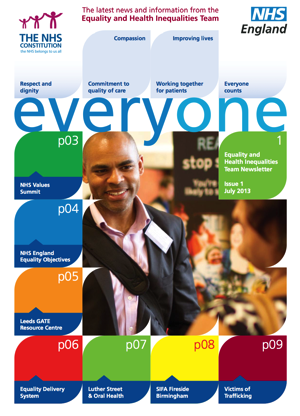 Observant readers will have noticed that I've said little or nothing about NHS England's Equality and Health Inequalities team since April, when the new structures came into being.

Yes, I was critical of the manner in which the team was recruited during the previous year, and how I still think continuity was compromised in that process.

Yes, I've pointed to the inequalities which were being reinforced in the establishment of NHS England, even as the leaders mouthed the right words.

I was perplexed, too, by the virtual radio silence in the last four months, during which time this blog was probably the only place where you could learn anything about the structure of the national Equality and Health Inequalities Team and appointments to it.

On the whole though, I had already decided to grant the new Equality and Health Inequalities team some space in which to get a grip
on their brief.

Any new team requires a bit of space and time to come together, to learn about each other, to establish their processes and objectives, and to start producing outputs (let alone outcomes).

And NHS England has already begun to deliver in some areas, most notably the kind of stakeholder engagement driven by their Patient Voice team.

It was about now that I was beginning to contemplate asking broader questions though.

So I was pleasantly surprised this morning to see a few answers.

The first edition of "Everyone", the Equality and Health Inequalities team's newsletter, has been published today.

In fact, "newsletter" might not be the right term, as the style is more that of a magazine.

Issue one explains the interim equality objectives, which I reported on back in April. There is confirmation that the Equality Delivery System (EDS) is undergoing a refresh and still has an important part in transformation plans. And there are pictures and profiles of the sixteen-strong Equality and Health Inequalities team … many being entirely new names in the sector.

Such a publication is very timely. Any longer and the silence from the new team would have prompted questions.

A four month interregnum on national Equality governance is something that has to be accepted following such a massive reorganisation of the NHS system in England.

And maybe it's OK to stress patience whilst a group of relative strangers continue to build from scratch.

For now it's OK to learn about personalities and to hear about plans and processes.

So long as nobody forgets that, in the end, this new team will ultimately be measured on the genuine outcomes.

What really changed. For who. And how permanently. 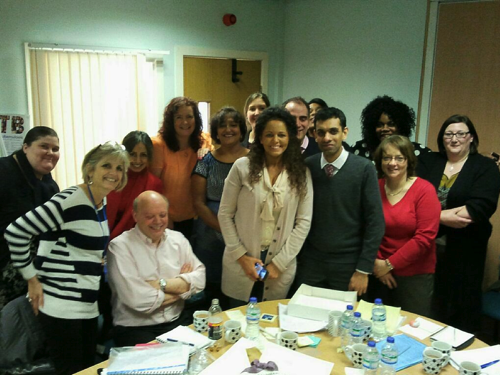 The team marks its inaugural meeting in April with a cake

Hi Christine, my CCG will only fund 8 electrolysis sessions as they feel this appropriate for women, the NHS England protocol that I've seen backs up this daft idea that electrolysis should be only 8 sessions and its totally void of anything for post op people's healthcare, and to make things worse my local CCG says its to make for a "fairer" NHS, fairer for whome may I ask, I wish I could communicate with you privately to outline my issues because how can I get through to these NHS people without outing myself to all and sundry, clearly laser can be done in 8 sessions but electrolysis can take upwards of a year, or even 2 years

Nobody in this world is actually immune to suffering and pain. Joy isn't defined by a lack of problems, however, having the ability to resolve all of them. The problem-free life is a mere delusion. Life is sort of a coin that has two facets, joy and sorrow thetipsguru.com.

student's life is a bustling issue with broad learning plans, Custom Homework Help social life, and extra-curricular responsibilities, and for a few; even part-time work. Offer your assignment stresses with us like a huge number of your companions have, from around the globe.