A Complete and Comprehensive History

TWELVE MONTHS AGO I published the first volume in my unique history of the rise of Trans activism in the UK.

Pressing Matters reveals the amazing story of how Trans people became one of the most marginalised minorities in British society, and how a tiny group of volunteers organised together to build a campaign to change that.

It was a long and arduous journey — the hardest part taking more than twelve years — and there were many barriers to overcome and disappointments along the way. This was all described from my own unique insider perspective as one of the leading activists. Everything is based on archived records to ensure a thoroughly accurate account of events.

Volume One was published on 29th December 2013 and was met with universal praise from those who’ve read and reviewed it. That first volume covered the period up to the end of 1997, when the campaign group Press for Change was fully functioning and beginning to see the possibility of success.

And now Volume Two completes that story, picking up at the start of 1998 and detailing the twists and turns in a tooth and nail battle to get around the table with government and shape new legislation.

As with the previous volume, this is meticulously researched from contemporaneous records, making this the definitive history of a key period in trans history.

Pressing Matters volume two is available now for download. You can read a sample by tapping and scrolling the image above. 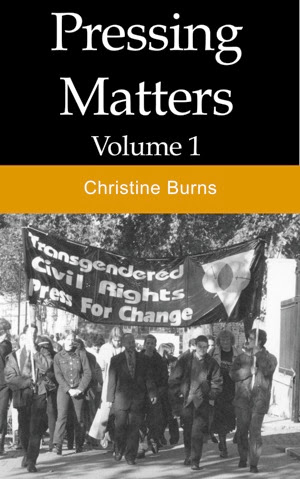 TEN YEARS AGO, at the start of 2004, the House of Lords was debating the Gender Recognition Bill.

The debate began in the Lords on 18th December 2003 and ended in a long and colourful report stage debate and third reading in the House of Commons on 8th June 2004.

Three weeks later, on 1st July 2004, the legislation received Royal Assent to become an Act of Parliament and, in April 2005, a new Gender Recognition Panel began receiving applications for the legal recognition of people who had undergone gender reassignment.

Since that time approximately four thousand people have successfully applied under the terms of the Act to be recognised for who they are in their acquired gender.

After the inevitable rush of cases to begin with, the rate quickly settled down to around 300 cases per year and has remained fairly constant at that rate ever since.

The legislation was not perfect by any means.

There were problems for some ex-patriate UK citizens who had been treated by clinicians abroad (not recognised by the panel) and there were disputes over the nature of the evidence which the gender recognition panel insisted on seeing.

The largest problem (and strongly contested all the way) was the requirement for married trans people to end their marriages as a condition for legal recognition (though, with careful planning, they could then immediately enter a civil partnership the same day).

The latter problem has been eliminated by the new legislation enabling same sex marriage; however the government has replaced the provision by an equally objectionable requirement that spouses should consent to their partner’s legal recognition.

Much water has flowed under the bridge since the Gender Recognition Act was passed ten years ago.

Trans people are still fighting for their rights — but it is nowadays a fight for social rights rather than legal ones.

In spite of significant advances in the past year, groups like Trans Media Watch still highlight regular discrimination against trans people in the national press.

For all that ongoing struggle there is no doubt, in hindsight, that the Gender Recognition Act had a transformative effect on the consciousness of the UK’s trans community.

When the Act was passed, few people would identify themselves willingly as trans and stand up to talk about these issues. Nowadays there are hundreds — even thousands — of people openly talking about them.

There are trans journalists writing in broadsheet newspapers and magazines. A trans woman headed the Independent on Sunday’s annual Pink List in October 2013, accompanied by a long list of “out and proud” trans activists.

The understanding of the diversity of what ‘trans’ or ‘transgender’ means has been transformed.

All this recent activity by a legion of new campaigners is great. But it has become plain that, with the passage of time, people are less and less aware of the history of the campaign that brought trans people to this place.

My new book “Pressing Matters”, published in time for the tenth anniversary of the Act, addresses this dearth of historical context.

Pressing Matters tells the story of how Britain’s tiny transsexual population lost their rights to privacy, legal protections and the recognition of family relationships for more than a generation in 1970. It explains how the long road to organising as a campaign took shape — and the setbacks along the way.

Pressing Matters is not a dull academic history though. The story of how Press for Change took shape and found its feet is woven with my own personal memoir of how it was on the inside — helping to create an effective political force engaging the energy of people who were mostly closeted, frightened, poor and geographically isolated.

Pressing Matters describes a time before email — before the web — before social media — and how the fledgling organisation gradually harnessed the power of computing and electronic communications as these became available. It is about careful strategic planning to use judicial processes effectively. But it is also about swift footed opportunism and community building too.

The eBook format means that this extensive history can be made affordable world wide.

But you don’t require a Kindle device to read the book.

Nowadays there are free Kindle reading apps for Windows and Macintosh PCs, plus Apple and Android tablets and phones.

If you prefer not to install an app, there is also now a free ‘Cloud Reader’, which enables you to read your Kindle books in an ordinary browser. The Cloud reader is ideal if you use a computer that isn’t yours (e.g. at work) or use Linux.